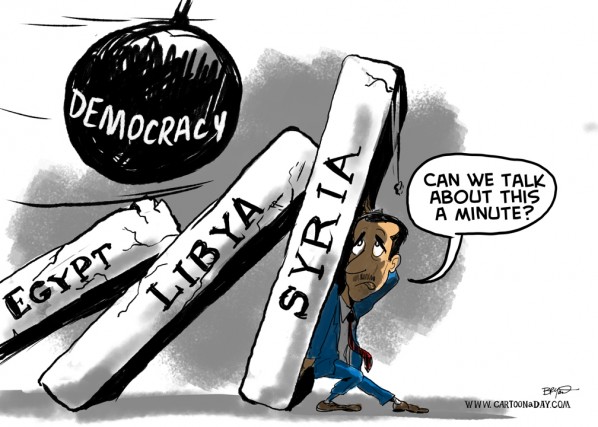 Perhaps like many of you, I have spent a great amount of time in the past few weeks piecing together information from various sources in attempt to make sense of the horrific attack in Syria with chemical weapons in late August of this year.

The commander-in-chief has called out to our consciences to take military action by recalling the images of convulsing, lifeless bodies that lay on the cold floor, and despaired parents picking up their children’s corpses.

However, on such an important issue, we must always ask ourselves what Henry David Thoreau once asked: “Must the citizen ever for a moment, or in the least degree, resign his conscience to the legislator?” We cannot make decisions as important as declaring acts of war based solely on emotional manipulation by our politicians. Therefore, I hope that this letter will provide a more complete picture on the issue, because the only thing more wrong than what occurred to those Syrian civilians would be to engage in another strenuous war for a misleading and unclear cause.

The only indisputable fact is that on August 21, 2013, several suburbs of Damascus were attacked with the nerve gas Sarin. The United Nations states in their investigative report on the incident that “…samples we have collected provide clear and convincing evidence that surface-to-surface rockets containing the nerve agent Sarin were used in [areas of Damascus].”  What the United Nations’ report does not indicate, however, is the culprit of these attacks. While U.S. officials and the Obama administration are fast to put the blame on the current Assad regime, a closer analysis could reveal some uncertainties to the claim.

The key question we must ask is: who would benefit from the attacks on these villages?  First, the Assad regime knows use of chemical weapons against its own citizens would greatly threaten ties and lose support from some of its closest allies.  Second, if Assad was to use chemical weapons, we would expect it to be aimed at facilities, arm depots, military bases occupied by Syrian rebels; there is no strategic military sense for Assad to strike Damascus suburbia.

On the other hand, the Syrian rebels would have much more motive and reason to plan an attack.  For the past two years, the rebels have received aid from Western nations and several other Arab factions (including Al-Qaeda), but the limited assistance has proven insufficient to successfully overthrow President Assad.  The notion that the rebels are culprits behind the attack are not so far-fetched if they knew the massacre would trigger foreign military intervention in Syria to overthrow the commanding dictator.

Since the Geneva Protocol 1925 and Chemical Weapons Treaty of 1993, which bans the use, production, and storage of chemical weapons, nearly 200 countries, including Syria, have vowed to destroy their stockpile of chemical weapons. While Syrian leaders may have violated international laws by using such weapons, both treaties and the United Nations Charter (Article 51) clearly prohibits military force by any nation on another, except in the case of self-defense.It is evident that Syria and the Assad regime have never attacked the United States, nor would they ever be foolish enough to do so.  Even President Obama himself stated in his national address that the Syrian regime poses no threat to the United States.

Martin Luther King, Jr. wrote in his letter from Birmingham Jail that “injustice anywhere is a threat to justice everywhere,” and these words remain true today. It would be a moral outrage for us to ignore the humanitarian crisis that occurred and still occurring in Syria. However, the injustice of gassing innocent civilians cannot be fixed with another unjust act that will likely kill thousands more innocent bystanders caught in the crossfires.

Let us not forget the results of the Iraq War: 4,500 American soldiers dead; 80,000 American soldiers wounded; over 100,000 civilian deaths; and $6 trillion dollars spent — for what? The strike group operations on Syria are estimated to cost taxpayers about $40 million a week.

An effective and stable resolution to every revolution must always come from a country’s domestic citizens, not foreign intruders.  As an outside force, the best way to assist the region is by being an exemplary model for a democratic nation (there is little democracy in waging wars), and advocate for more diplomatic ties and approaches.

If Americans are exceptional as President Obama says, we must see that the most exceptional choice in this situation is to avoid repeating the same grave mistakes of the past so the men and women of our military will not have to die for another expensive, unjust, and unwinnable war.