Libertarians and the left find common ground on quite a lot of issues; however, when it comes to helping out the poor (something both sides want to do but disagree on policy) there is a definite split, as those on the left wish to use government programs to help those in need.  The problem is that the 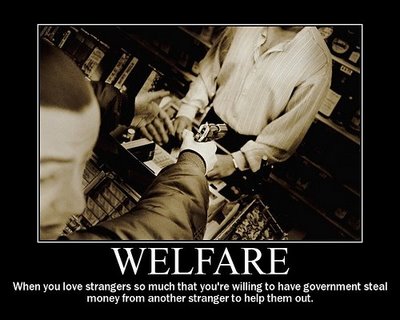 government does not have any money of its own; therefore, it has to take it from individuals through taxation.  Additionally, the government is just flat out horrible at fixing things, let alone a massive problem such as poverty.

Libertarians, on the other hand, wish to see a privatization of the welfare state.  This does not mean the government contracting taxpayers’ dollars out to private organizations, though; that simply isn’t enough change.  It means real privatization:  letting individuals keep their money and decide for themselves how to use it and where to donate it.  This is the way a free society works, rather than by stealing from some people and redistributing it to others.  Of course, liberals say that this isn’t possible; there is no way, they argue, that private individuals and organizations can take care of the nation’s poor.  But is this necessarily true?

National Endowment for the Arts (a status-quo enabling agency that wastes taxpayers’ money). I know, it is a weird source of optimism but I will explain.  In the 1990s, the NEA’s budget was slashed by 40% from $170 million to $99.5 million.  What happened during that time to private contributions to the arts?  It went up.  By how much?  Yep, you guessed it: 40%.

Now, the NEA is not a welfare program — although it does give grants to many programs that target poor communities — so how can it relate to privatizing welfare?  I do admit that this does not prove that the privatization of welfare will work; it is merely an example that shows people are willing to give to a cause they believe in.  If people increased their donations for the arts when the NEA’s budget was cut, would they not be willing to do the same for poverty if the public welfare system was cut?

To further my point, another example — an even stronger one at that — of how a private welfare system could work can be found in 19th century Sweden.  During the switch to a capitalistic ecnonomy, Sweden experienced an increase in “private welfare initiatives.”  These initiatives were greatly successful without the overarching hand of the State interferring; unfortunately, though, most of the programs have either been banned or phased out by the Swedish government.  But we can look back to the original system and see what worked.  One private company alone, Ericcson, offered welfare services that ranged from “children’s gardens to free health care and sports facilities.”

It is because of this that I strongly believe Americans would be able to fight poverty in the private sector — using both non-profit and for-profit means — better than the government.  Of course, the best way to get rid of poverty is through a true free-market system where businesses thrive, unemployment drops, and the private sector expands.  Still, there will always be a small percentage of the population that needs help and the government is definitely not the solution to the problem.  It’s time to put faith in the American people and ultimately in personal liberty.