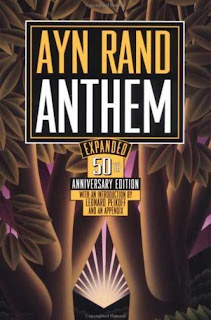 Personal liberty, freedom, choice, autonomy… all of these things have one fundamental component in common: their focus on the individual — “I.” It is so simple a word and yet its use conveys the most powerful emotions and desires we, as humans, can conjure. To say that “I” need, want, feel, believe, aspire to [insert any and all desires here] is to instill in listeners the most basic understanding that you are a free-thinking and independent individual, capable, in your oneness, of any and all things.

Ayn Rand’s Anthem portrays a world where this word “I” is lost. Individual identity has been all but destroyed and all persons are referred to, even in the singular, as the collective “We.” All humans exist to contribute to the “system,” their purpose and future determined for them without any regard for their dreams or ambitions.

Rand’s protagonist, known only as Equality 7-2521, struggles with this complete lack of identity, eventually coming to realize what we all take for granted — that there is truly nothing more essential to the human consciousness, nor sacred to the definition of humanity, than the word “I.” Without it we cannot have liberty. Without it we cannot have freedom because all wants, needs and desires are subjugated to the “good” of the collective “We.”

Many readers interpret Rand’s words to be profound selfishness and her philosophy to be devoid of any kindness or empathy. On the contrary, this is not the message that Rand is attempting to convey. True, she champions the importance of individuality and liberty (concepts close to the hearts of modern libertarians), but she does not forsake all others in all cases.

Instead, she is saying that caring for others is an innately personal choice — it cannot be forced upon individuals. To do so would be to remove from people their own personal autonomy. Never does she say that we should not care for others, but indeed she stresses that affection and companionship must be earned. Loyalty, friendship and camaraderie cannot be given without due reciprocation: “[T]o earn my love, my brothers must do more than have been born…. I honor men with my love. But honor is a thing to be earned.”

There is a readily accepted notion today that respect is just given; commitment and loyalty should be bestowed upon all people just by virtue of their being. To accept such notions is to fall into the trap that Rand warns against — it is a step towards permanently replacing your own desires with the “needs” of others.

We cannot allow guilt to drive us to replace our own dreams with the requirements of the “common good” because truly, that is the driving force behind the transition from “I” to “We.” Acquiescence to the expectations of those who cannot stand up for their own personal desires, of those who cannot say “no” when the masses demand that they give and give and give until they can give no more will bring about the downfall of the essential “I.”

It is when we feel pressured by that guilt that we must push back just a little bit more, fight just a little bit harder to maintain our rights as individuals. Because “the word ‘We’ must never be spoken, save by one’s choice and as a second thought. This word must never be placed first within a man’s soul, else it becomes a monster, the root of all evils on earth, the root of man’s torture by men, and of an unspeakable lie.”

Libertarianism stands for liberty — stands for the hopes and dreams of individuals, the right of those individuals to pursue those dreams until they come to fruition. It is your right as a human being to be free, but even more than that, it is your duty as an individual to safeguard your individuality from those who would see you fall into line and place your desires second to the “good of the people.”

The good of the people is not in focusing all towards one goal – it is in empowering individuals to follow their own dreams. By doing so, we will all create towns, cities and countries that understand the true meaning of “good” — the ultimate good. The good that comes from true freedom.