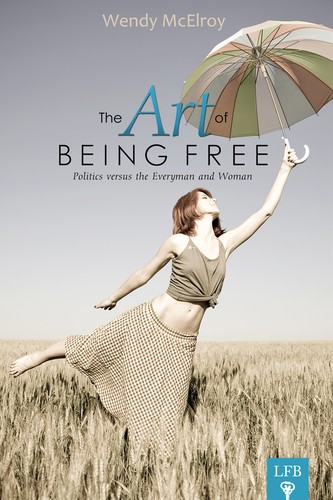 Wendy McElroy’s new book, The Art of Being Free, is a marvelous and intimate collection of thoughts on the state of freedom in our world.

McElroy’s name is at once both ubiquitous and unknown in the world of libertarianism. She has written multiple books (including Freedom, Feminism, and the State and The Reasonable Woman: A Guide to Intellectual Survival), articles, and essays over the course of her long career. Her work can be found at numerous publications, including Mises Daily and at the Independent Institute, where she is currently a Research Fellow. Despite all this, however, many libertarians are unfamiliar with her, much to their own misfortune.

To understand her writings, one must first understand her. A self-described “individualist feminist,” McElroy’s philosophy has been forged by ferocious autodidacticism and a life of independence that began as a sixteen-year old runaway. Her unique perspective on freedom shines brightly in every sentence she pens.

Subtitled “Politics versus the Everyman and Woman,” her newest book is guaranteed to be unlike anything you’ve ever read. It does not present any new or revolutionary theories, philosophies, or epistemologies. Nor does it intend to. What is does seek to do—and does extremely well—is take existing individualist paradigms and communicate them in a startlingly refreshing manner.

This is where the intimacy comes in. McElroy prefaces the book by sharing a personal story of intellectual awakening, discussing her relationship with the works of Ayn Rand, Murray Rothbard, and Virginia Woolf. She also lays out what her vision of the book is: a “combination of theory, issues, profiles, and strategy, because I cannot separate the ideas from the people, the positions from a vision of the future.”

McElroy’s effortless style elevates what might otherwise be a mere gallimaufry of musings in the hands of a lesser writer into a fabulously brilliant and poignant argument in favor of freedom. She reaches her aesthetic peak in the book’s final section, a culmination of everything prior that shares both her vision of the future and how to get there.

“When I look at the world at large, I despair,” she writes. “But I am responsible for my own despair because I allow situations over which I have no control to drain away happiness and energy from the daily life in which I am effective.” Drawing on earlier discussions about natural rights, civil disobedience, and personal volition, among other things, she concludes that the best course of action—for her, for the reader, for the cause of liberty—is to focus first and foremost on how we can be free in our own lives, while disregarding the state and politics whenever possible.

The triumphant exposition laid out over the course of the entire book is uplifting and inspirational for anyone who—like the author herself—has doubts about the future and is despondent over any one individual’s relative inability to affect change on a grand scale. Her message of the virtue of the individual, the horror of the state, and the relationship between the two is communicated with beauty, clarity, and a practical romanticism that make the book both intellectually stimulating and substantively charming.

If I were forced to find a foible in this book, it would be its length. Considering the degree with which I took pleasure in turning its pages, I would have liked to turn even more. The section entitled “Principles Work through People” contains the profiles of five individualist thinkers: La Boétie, Voltaire, Thoreau, Garrison, and Hoiles. This was too few for my taste.

Nevertheless, one cannot downplay what was obviously a deliberate and carefully considered decision to include those (and only those) five particular profiles. Many readers will undoubtedly appreciate McElroy’s succinctness.

This book is highly recommended to anyone—libertarian or otherwise—who has any concern whatsoever for personal freedom and quality of life.

The Art of Being Free was published in 2012 by Laissez-Faire Books, and is available for sale in paperback and as an e-book online.