Kevin DeAnna at Taki’s Magazine asks, “Is it a revolution?”  It’s an important and prescient question at this most propitious moment.  I hope it is a revolution, or more accurately, a counter-revolution that would restore the relationship between the State and society that existed from 1789 to the Revolution of 1913.

To define revolution, I turn to Frank Chodorov:

The replacement of one ruling regime by another does not in itself measure up to a revolution; that can be accomplished by a gang fight or an election. A revolution is an effective change in relationship between rulers and ruled, a shifting of the incidence of power from society to the state, or vice versa. The American Revolution was an effective one not because it got rid of the British crown, but because it set up a weaker state, vis-a-vis society.

…we cannot argue with a fact: the Constitution of 1789 charted the course of the new state-society relationship as nearly as a political document could, and thus became the profit-and-loss statement of the preceding rebellion. The going ethos was individualistic; in his pursuit of happiness the early American felt quite satisfied to go it alone, accepting restraint only insofar as restraint was necessary for the security of property and the maintenance of peace. He would tolerate coercion to restrain coercion, and no more.

While being rightfully skeptical of the “newly found anti-system mentality of the GOP,” DeAnna seems to want to answer his question affirmatively.  He sees that “the Tea Parties are what conservatives can do when all aspects of the movement are working together and are united in opposition around issues that everyone agrees on.  It will not change policy, but it has mobilized a constituency that wasn’t mobilized before.” 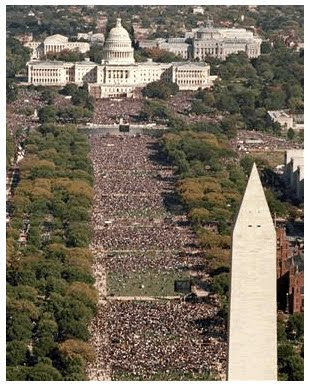 Unfortunately, the “issues that everyone agrees on” are all in the form of opposition (ie Anti-ObamaCare, Anti-Stimulus, Anti-Bailout, Anti-Czars, etc.)  As proponents of individual rights this is the recurring problem in politics.  What reformist policy programs can the Right offer that do not expand the State?  During the Bush Years, the best the GOP could offer was tax cuts, No Child Left Behind, “free” prescription drugs, and SCHIP.  If the GOP wants true reform (cut taxes and spending), they will have to abdicate their ‘do-gooder’ power on their own volition.  Reminds me of Henry Mencken, “The urge to save humanity is almost always a false front for the urge to rule.”

What would a real view of limited government look like?  Auditing the Fed sounds like a good idea, but the real goal is ending it.  Richard Spencer has “always felt something deeply disingenuous about the movement to audit the Federal Reserve.”  Or as Dylan Hales would say: End it, Don’t Mend It.  Converting to the national FairTax with all its attendant “prebates and rebates” is a definite improvement over the 16th Amendment, but the real goal is abolishing the 16th Amendment and reinvigorating federalism by empowering the 10th Amendment.

DeAnna concludes that “the question is not what [the tea partiers] do after the march. The question is what they do after conservatism.”   Good point; however, conservatism as it was practiced by the GOP in the last decade is electorally dead.  Getting the Statist Republicans to understand that might be difficult but the fact holds.  “Compassionate Conservatism” is dead.

But thoughtful conservatism in its true form is just beginning to find its place in the public square.   And by God, it is time for another revolution.   It’s time for the tree of liberty to grow again.  In times like these, no such tree can flourish without people and groups like Young Americans for Liberty.  People devoted to constant learning, forming a historical consciousness, and educating the people about first principles, free-market economics, and the root of all evil.