Of course by “it,” I mean me. Hello 🙂 My name is Jose, and I hail from Venezuela, communist paradise extraordinaire. Listen to my story.

This could be yet another article or blog post describing the recent student protests that have been going on in Venezuela. Or I could be talking about the communist regime’s terrible repression of said protests and the resulting student deaths. But I’m not in Venezuela; in fact I escaped from Venezuela two months ago, so I don’t have any special insight or perspective to share regarding the chaos and mayhem.

I could write about the reasons why students are protesting; the monstrous murder rate, or the wealth destroying inflation rate, or the deep scarcity of the most basic goods. But you can just get those stats anywhere, there’s not much I can add to that. But I did live in Venezuela my first 26 years of existence, more than half of them under the Chavista communist regime. What I can offer you, dear reader, is my story and how all those terrible numbers translate from a chart to real life. 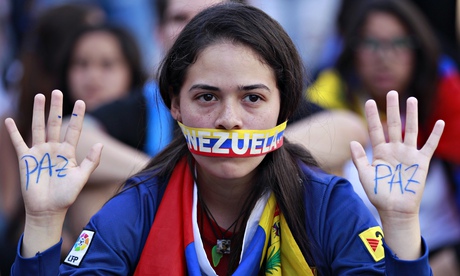 Let’s start with fear, the constant unremitting fear you feel when you go out into the street. Every couple of weeks you hear a story about how a friend got robbed in a mall parking lot, or how your cousin was jogging in the morning near where you live and some thugs in a motorcycle took his phone at gunpoint, or how a friend got shot in the chest and died.

Imagine staying in a friend’s house at night and hearing rapid gunshot fire. Imagine being stuck in traffic stressing about that giant column of wild motorcyclists swooshing by your car, praying that none of them stops next to your window and kindly asks for your belongings, maybe you’re lucky and you just witness how he does it to the car in front of you. Imagine everything being closed almost as soon as the sun comes down because of criminals.

Now imagine being a 20-something and feeling like a prisoner; your house is your jail; the guards are criminals. Imagine then, feeling how the alleged best years of your life are wasted in fear and confinement in your parents’ house. But hey! Maybe that feeling of wasting your life in confinement wouldn’t be so bad if you were your own man, right? It’s not the same staying in your parents’ house; with their old people rules and their “concerns” about you getting shot if you go out, than you having your own place and living by your own (adjusted to criminality) rules. Right? It sure would be better, no?

Picture then a young, recently-graduated Systems Engineer out of one the alleged best Universities in the country. You get a job in a multinational corporation, a big one. Good for you, recently-graduated engineer! You’ll be going places. Soon you will be able to maybe rent an apartment by yourself, and even buy a car. Start moving up in the world!

Except your monthly salary as an engineer is one third of what it costs to rent an apartment and something like 1/100 of what a used car is costing. It doesn’t matter anyway because no one is renting and there are no cars being sold, used or new, anyway. Gas is really cheap though — great consolation prize.

So, with 50% yearly inflation and constant devaluation of the currency, saving for the future is a joke. So what is a young engineer in his 20s to do with his hard-earned salary? Well, go out a few times every month with your girlfriend and maybe buy one video game, because that’s what your purchasing power allows. That is it.

Can you also picture living in a small city with constant, nerve wrecking, personal time collapsing traffic? Oh, you live in NYC, LA or Chicago and are not impressed? Ok, let me try this: can you picture having to endure 3 hours one-way traffic jams. Every day? At any given hour? Dear first world reader, can you picture what I’m saying? Can you conceive how the present is just exhausting and how the future looks grim for a young Venezuelan? No?

Let me be even more specific with my story: I got married in 2012, my wife and I weren’t able to live together, both of us college educated, couldn’t afford to rent anything. We decided to get married anyway and keep living at our parents. If we “waited” until the “right time,” then we would probably have had to wait until one of our parents died and we could inherit and then move into the house.

As an engineer I was making 5000 Venezuelan currency monthly; renting a one bedroom apartment in a neighborhood where it wasn’t likely you’d get shot cost 15,000, no furniture and no utilities included. I needed at least three fulltime engineering jobs to be able to simply afford a place to live. A used car would cost something like 500 thousand, so I didn’t even think about it.

With my salary I could maybe buy one video game a month, a single PS3 title went for something like 3000 — more than half my salary in a single video game. My wife and I spent the first year and a half of our marriage living as boyfriend and girlfriend. Frustrated that we couldn’t have a life together, or even begin one. We spent most of our time in either apartment, because going out was simply out of the question. We had witnessed too many crimes and deaths. Risking your life to get a drink or have a burger was simply not worth it.

I quit my job, as it wasn’t getting me anywhere. I decided to start my own business and set up my bedroom as my main office, so at least I could avoid going out into the streets. The feeling of confinement intensified, but it was better than being chronically tired because of the abnormal traffic of Caracas and being in constant fear of your life. Thanks to the complete control over the economy the government has in Venezuela, it took more than three months and an excessive amount of fees to simply register my company. I was already being regulated out of business.

Then my wife and I realized it was all pointless. Venezuela just drowns you. You either hook up with the government or are snuffed out, either by criminals or the government itself. Things were steadily and surely getting worse. We decided to leave, as soon as possible. But going from one Latin American country to the next (the fastest way) was simply delaying misery; we needed a complete paradigm shift. So we chose America.

We decided to ditch our useless Venezuelan degrees; it’s better to start from scratch right now than wait in a hellhole for “job opportunities” abroad. Our families made a last and great effort to get us out, knowing we had no future if we stayed.

Venezuela gave us a final farewell just days before our plane took off; my wife was almost robbed near her house, while driving my uncle’s car. Two bikers rammed and tried to jump into her moving car. You may have thought I was exaggerating when I said “wild motorcyclists” a couple of paragraphs back, or when I talked about the constant and deep fear for your life, didn’t you, dear reader?

Right now we are in America — want to know how we are doing as immigrants? I’ll tell you. I make more money in a week as a part-time student assistant at minimum wage than what I used to make in a month in Venezuela as full time systems engineer. For the first time since we were married in 2012, my wife and I get to live together, alone, in the same house.

A month ago I was able to buy my very first car, something that was so damn impossible back in communist-land that I didn’t even think about thinking about it.

Don’t get me wrong, it’s not easy. We have very little free time; culture shock is a real thing; we miss our family and friends; and I have to count every penny that comes in and out of my pocket. But for the first time we are completely responsible for everything that needs to be done, and we’re expecting our first child in July. Lots of stress and responsibility. But no matter how hard we may have it here, it is orders of magnitude better than anything we ever had in Venezuela and certainly better than anything we could have gotten had we stayed there.

Why? Because the stress we have here is the stress of a normal life, the stress of having a budget, not of being scared of some random bullet ending the party for you. The responsibilities we have here are the normal responsibilities of adulthood and they come with the freedom of adulthood; they’re better than the constant frustration of wanting to live your life your own way but being forced to still be submissive to someone else.

However, none of the above compares to the greatest difference of all: every day we wake up and our life has meaning and purpose because we see a future, not this neverending and oppressive sensation of being stuck and going nowhere. We suffer and work hard today because if we do so, tomorrow will be better. In Venezuela every day is worse than the day before it and better than the next one. It has been like that since I can remember.