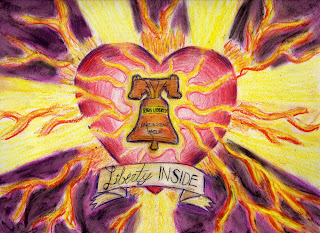 Sadhguru Vasudev cautions those that want to change the world to first rid their own hearts of fear and pain, before embarking to change the way others live — otherwise one will only transcribe one’s own darkness upon the world and make a bigger mess.

Before you can bring the message of liberty to anyone, you must first “live in truth” and experience liberty in your mind and heart. If your heart, mind, and body, are not aligned to the same purpose your message will be muddled. As the saying goes, ” No one cares how much you know, until they know how much you care.” But if you have dedicated your entire being to freedom and really feel it, then no force can stop our message.

Do it now. Break yourself apart from the archetypal authoritarian nested deep in your mind. Cease your fevered dreams of wandering the Stately Halls, searching for meaning that isn’t there.Krishnamurti writes:

It is very easy to conform to what your society or your parents and teachers tell you. That is a safe and easy way of existing; but that is not living, because in it there is fear, decay, death. To live is to find out for yourself what is true, and you can do this only when there is freedom, when there is continuous revolution inwardly, within yourself.

Freedom and liberty are not mere political concepts, nor simply ethical systems. Liberty is not just the freedom to do what you will, but the freedom to be,  to create yourself as you see fit, and to let others do the same. A free society operates on the urge to help all beings grow by no hand of one’s own, it is a grand garden that bears fruit without a gardener.
You must first bear your own fruit of mind and heart before you can help someone else bloom.

Don’t take it for granted that this is an orderly society; don’t mesmerize yourself with words. Whether here in Europe, in America or Russia, the world is in a process of decay. If you see the decay, you have a challenge: you are challenged to find a way of solving this urgent problem. And how you respond to the challenge is important, is it not?

… You can respond fully, adequately only if there is no fear in you, only if you don’t think as … a communist or a capitalist, but as a total human being who is trying to solve this problem; and you cannot solve it unless you yourself are in revolt against the whole thing, against the ambitious acquisitiveness on which society is based. When you yourself are not ambitious, not acquisitive, not clinging to your own security – only then can you respond to the challenge and create a new world.

He faults both the capitalist and the communist, because they both have a vision of society that they want forced upon the other, and all of the world. The libertarian understands this folly and to paraphrase Frederic Bastiat, “has joined the ranks of the reformers, for the sole purpose of leaving people alone.”

The Police State grows. Let it grow, and let go of all fear. Act now because you will not be any freer tomorrow, next week, or next year. Let go of all restraints inside you and dedicate your being to the freedom of all sentience.

No matter how bad things get no force can take that away from you. No forced confession, no waterboarded murmur can change what is in your heart.

What ever comes, Liberty will prevail. The left and right are dissolving into reason, and the liberty movement is bigger and more viable than ever.

The central planners are inflexible and unadaptable and will fail under their own weight and blindness. Markets will find workarounds and alternatives, human beings will find ways to live in liberty as the establishment of the State-Corporate Elite erodes beneath them.

Freedom and prosperity will be ours and, to draw a page from Tao de Ching 17, the people will rise up with their hands in the air and say “We ourselves have achieved it!”

So don’t just pledge to join Young Americans for Liberty, take a pledge to be a liberated being with a heart pulsing with freedom that defies the rules and to build your own reality.

This article was also published in MTSU Sidelines.