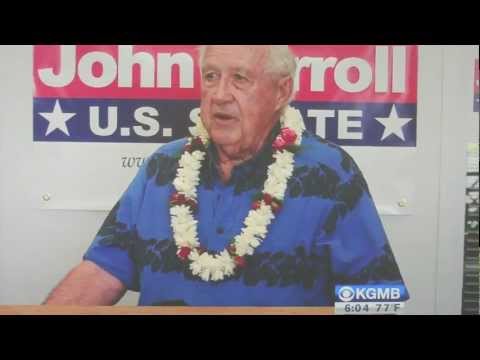 On Thursday, November 29, 2012, the Young Americans for Liberty Chapter at the University of Hawaii at Manoa had the privilege of hosting former Hawaii State Senator John Carroll (R).

Senator Carroll spoke to the YAL members about his personal commitment to promoting the liberty movement by making it his life’s mission to see the repeal of the Jones Act.  Earlier the same day Senator Carroll filed a lawsuit in federal district court on behalf of seven plaintiffs, though the lawsuit itself is a class-action lawsuit, alleges “the maritime law, which requires all shipping vessels traveling between U.S. ports to be American-built, -owned -flagged and -manned, encourages shipping monopolies and unfairly inflates prices for Hawaii consumers.”

Carroll had challenged the constitutionality of the Jones Act prior in 2009, but the case was dismissed for failing to establish a direct connection between the harm suffered and the law.

And while all of this raises a number of interesting points of discussion regarding the Jones Act and its constitutionality, or better yet unconstitutionality, the harmful effects it has on Hawaii’s economic state, and the overall illogical fallacies of American patriotism, I want to talk about something different — the inspiration of Senator Carroll’s goal to see the Jones Act repealed.

The liberty movement is alive and well among young people and while it is certainly our generation that will carry the flames of liberty into the future, it is sometimes forgotten that we are not by any means a “new” phenomena.  No, we are better thought of as a reawakening, a generation whose youth and commitment to liberty amplifies the voice of liberty of the generations before us.

Voices like Senator Carroll’s who, despite former defeat and lack of support from his colleagues, has seen to it that although in his 80s he will exercise his freedom for the greater good of his state, of his citizenry, and ultimately of his country.  Let us not forget that patron saint of our movement, Dr. Ron Paul, who has never faltered in his stand on liberty, and who serves as a reminder that the “honest politician” has not faded into the shadows of history.