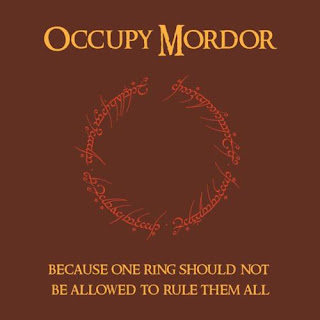 There has been mixed responses to Occupy Wall Street by libertarians. Some see the movement as a positive, while others see them as little more than lazy hipsters.

But libertarians must be sensitive why people feel the way they do about issues.

The occupiers point out a legitimate concern that “the 1%” control vastly more power and wealth than “the 99%,” and corporations have accumulated more power and privilege than is healthy for an open society. Some other concerns and demands are absurd, but the heart of the matter is on track.

The contention is why has this happened?
While many on the left are quick to blame a nebulous thing called “greed,” or lack of regulation, the matter is more complicated than that.

This calls for a Lord of the Rings metaphor.

Let’s say that Sauron, the big cheese bad guy of Lord of the Rings, is the corporate hedgemony. The 1%. Most people in Middle Earth agree that this is a problem, but there are a few different camps offering different solutions.

Group 1) OWS/Left: Wants to confront the power of Sauron directly in battle using the one ring and “Occupy Mordor.” They want to use the power of the state (the Ring) to reign in and defeat the corporations (Sauron). Boramir counts himself among this camp. 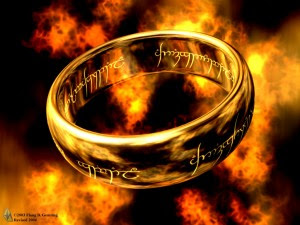 Group 1 is also quick to blame most of Middle Earth’s problems on Sauron’s lobbyists, such as Worm Tongue. They say that if we were to just ban lobbyists from communicating to and serving kings and royalty (Congress) then Sauron Inc. would be put in his place.

But isn’t it true so that leeches like Worm Tongue are drawn to serve Sauron because he possesses the Ring (the power of the state), and they’d be drawn to anyone who possessed and used it?

My point is this:  If government had no deals and privileges to dole out to the well-connected, then the 1% wouldn’t have the undue power they have now.  We need to destroy the ring — the government’s ability to play favorites in the marketplace — rather than merely giving it to someone else who will eventually be corrupted by it.  To make this real change possible, we’d need the involvement of the actual 99%, libertarian and Democrat, Republican and independent, OWS protester and Tea Partier alike. 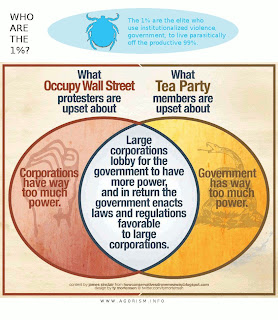 Let us build a Fellowship to destroy the linchpin of state-corporate hedgemony! Let us do it today!