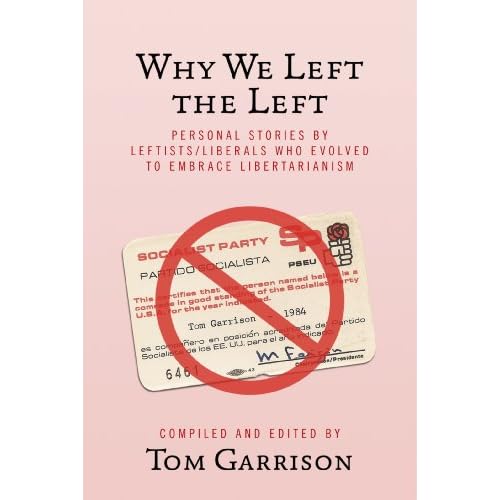 The following is an excerpt from my essay “Oedipus Laevus” extracted from Why We Left the Left, a collection of personal stories by Leftists who evolved to embrace libertarianism.

Some of the greatest works of art ever created are the Greek tragedies of Sophocles. Antigone, Oedipus Rex and the like have entertained and captivated audiences and readers for literally thousands of years, and likely will continue to do so for thousands more. What made, and continues to make, the writings of Sophocles so compelling is one dramatic concept that he employed flawlessly—hubris.

Hubris can be thought of at a basic level as pride, but it is more than that. It is pride that is so excessive, so overpowering, that it results in its possessor completing losing touch with reality. And, when dealing with hubris, there almost always are dire consequences as a result of one’s blind arrogance.

In the greatest tragedies, the characters that meet their downfall by their own hands almost always have the best of intentions. Oedipus flees Corinth in a genuine effort to avoid killing his father and sleeping with his mother. However, the fact that his efforts are genuine did not change the fact that he was poorly informed about his situation, and therefore his actions had unintended consequences…

…If I had to sum up in one word why I have abandoned people like President Obama and the rest of the American Left, it is their hubris. It exists in many forms throughout the standard liberal spectrum, but I have come to see it more and more as the years have progressed. The first example that comes to mind is the government official who thinks that if he could just be given more control, he could make the necessary changes and plan peoples’ lives for them, serving the common good at the end of the day.

However, this is not the leftist hubris that pushed me away from modern liberalism. Rather, for me it was the naïve college student who just did not understand why anyone should ever make more than $250,000, the English professor who thought that economics is a field of study for people who only care about money, and the social worker who thought that it was an affront to humanity to say anyone’s labor could ever be worth less than the minimum wage. I was driven away from the Left by a political philosophy that turned up its nose at anyone who was willing to base their economic and political philosophy on one basic truth—every single human being is, at the end of the day, self-interested….

…When I encounter leftists with whom I disagree on social policy issues in particular, I find they often immediately jump to the conclusion that since I disagree with their means I necessarily disagree with their ends…Like the honest leftist, I want a world with less poverty. I want a world where food is affordable. I want a world with less war. I want a world where everyone can have a fulfilling job. My difference with the leftist is not on whether these are worthy ends, but rather on how to achieve these ends. The leftists’ hubris truly starts to come into play when one sees that their means not only fail to achieve their goals, but also directly antagonize them. And yet, there is no reconsideration of how to act, no thought that maybe the American Left’s public policy is based in misguided wishful thinking. Rather, the exact same policies are tried again, just on a grander scale, and these same policies once again fail…

…Oedipus knew that there was a problem that needed to be fixed.  He knew that he needed to evade the possibility of killing his father and sleeping with his mother. However, as Oedipus’s tragic tale shows, the fact that there is a problem does not justify the use of any solution. Trying to fix a problem without fully understanding it can result in dire consequences, and despite the fact that Oedipus put forth a genuine effort to avoid his fate, his lack of situational awareness drove him right to the place he never wanted to be.

Many on the Left have good intentions. However, good intentions are not enough to bring about good results in and of themselves. The worst part it is that many on the Left believe themselves to be superior simply because of their good intentions. This is hubris in its purest form. It is a hubris that is based in the leftists’ inability to accept many of the basic realities of the world around them, and it is a hubris that has driven our country into an economic pit. It was the realization that this hubris exists throughout the American Left that led me to walk away from this political viewpoint.