There has been quite a lot of controversy surrounding Planned Parenthood (PP) lately.  The debate has been whether or not taxpayer dollars should be given to PP in light of the truly abhorrent amount of abortions they perform.  Americans are starting to ask, “Is it right to ask individuals to give their own hard earned money to fund something they find morally reprehensible?”

Allow me to be really frank on this issue: There is no reason, no rationale, no argument that anyone can make to convince me that taxpayers should provide funds to PP.  I’ve seen all the bleeding hearts post on Facebook and complain in the media about how many good things PP does and how it deserves my support.  “Thank you for cutting off funding to cancer screening programs in order to prove you are pro-life,” read one of those trendy memes floating around online.  Essentially, I’m being told not to mind the hundreds of thousands (324,008 in 2008) of abortions they perform each year because they provide cancer screenings.  Call me crazy, but I think the fact that Planned Parenthood performed 26% of America’s abortions in 2008 is solid grounds for a pro-life individual to consider not giving money to them. 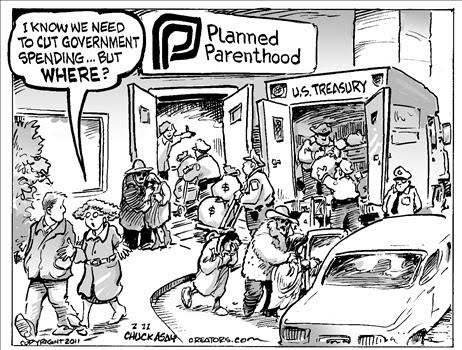 Still, I’m fully aware that PP has provided some quality services for people, such as cancer screenings (among other things).  That’s absolutely great and I encourage them to continue that.  However, I want them to plan on doing so without my money so long as they take innocent lives by the masses.  Plain and simple: I reserve the right to my own money (what a radical idea) and if I want to support PP then I will do it voluntarily, not through the forced taxation of the federal government.

Really, though, this specific issue highlights the bigger problem: an overreaching government that is meddling in too many areas of our lives.  Want to fix this whole controversy?  Get government out of our health care and welfare systems.  Privatize these services and it’ll fix many of our problems, especially the moral issue of taxpayer-funded abortions, to be sure.  Planned Parenthood and other welfare/health care providers (even the pro-life ones!) wouldn’t need federal subsidization if we started reintroducing the idea that individuals do not need to rely on government for everything.  Reliance on government in every facet of our lives is the true problem.  Until we fix that we will continue to have these types of problems.