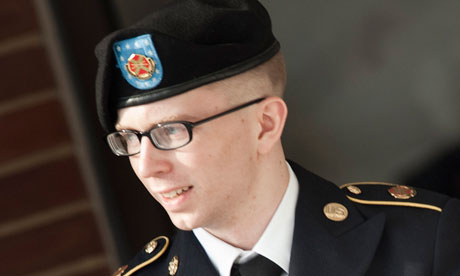 The five-day pre-trial hearing for PFC Bradley Manning, who is facing jail time for passing sensitive government information to WikiLeaks, began today at Fort Meade, Maryland. Manning is facing 24 counts of treason and espionage, which could lead to life in military prison without parole if he is convicted.

This is a case that has captured international attention, and controversy over the severity of the possible punishment for what some consider to be a victimless crime. Among those defending Manning is the ACLU, which is concerned over the precedent Manning’s case would set for service members, and their relations with the media after the case.

“The threat of criminal prosecution hangs over any service member who gives an interview to a reporter, writes a letter to the editor, or posts a blog on the internet. In its zeal to throw the book at Manning, the government has so overreached that its ‘success’ would turn thousands of loyal soldiers into criminals,” the ACLU said in a statement to The Guardian.

Manning is accused of “aiding the enemy” by providing WikiLeaks with sensitive information two years ago. The government’s case is that, by giving secret information to a third-party source, it endangers national security because it makes it easier for terrorists to acquire the information. Manning’s defense is arguing that this would bring criminal charges against any service member that might talk to the media from this point forward.

“If I’m a government official and I’m concerned by some aspect of government practice, and I go to the New York Times with information, and the newspaper publishes it, have I now aided the enemy?” David Coombs, Manning’s attorney said to The Guardian.

David Coombs, Manning’s attorney, wants two charges dropped, which relates to the software Manning allegedly used to pass on the documents while he was working in Iraq. The software, according to Coombs, regards downloading speed rather than the actual transfer of information. The full trial is set to take place this September.

This article was also featured on American Military.