There has been a prevailing narrative for years now that the Republican Party can only be successful by quote “building a big tent” that welcomes in progressive and liberal ideas in order to appeal to independent voters.  The corollary argument is that there just aren’t enough so-called conservatives to build an electoral block that can win elections.  This premise has been repeated and reinforced by the media endlessly and seems to have been swallowed unquestioningly by many Republicans including national party leaders and strategists. 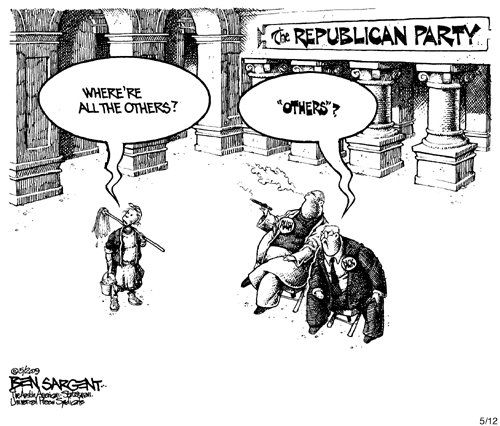 The genesis of this notion is often attributed to the failed presidential campaign of Barry Goldwater, who was drubbed by Lyndon Johnson in 1964.  The contemporary lesson of that race is that if Republicans run ideologically rightwing or libertarian-leaning candidates, they lose.  Of course that assumption ignores other important factors such as the lousy, gaffe-filled campaign of Goldwater, the lingering sense (effectively propagated by the Democrats) that Johnson was the heir to the Kennedy legacy just a year after his murder shocked the country, and the devastating Daisy ad.

In fact, the biggest electoral victories in the history of the modern Republican Party came in 1980 when Ronald Reagan declared that government WAS the problem and in 1994 with the very conservative Contract with America.  In both cases they faced an electorate frustrated with Democrat presidents and won by running to the right.

The electoral trend in this off-year election cycle appear to confirm this.  In Virginia and New Jersey, both states easily won by Barack Obama, Republican gubernatorial candidates are favored to win.  In the 23rd district of New York, two recent polls (here and here) show a Conservative Party candidate, Doug Hoffman, beating both a Democrat and a far-left Republican .  Even in uber-liberal San Francisco, polls have a Republican within striking distance in the 10th district congressional race.

This leaves me wondering what Newt Gingrich, Lindsey Graham, and their ilk are thinking when they continue to assert that only by giving up principle to “expand the party” will the Republicans be able to regain a governing majority.  Obama has sharpened the distinction between Republicans and Democrats and Republicans have benefitted.  How does reblurring those lines serve anyone?

All of which leads me to conclude that it is time for Republican leaders, opinion-makers, and strategists to start questioning the premise on which the alleged future success of the Republican Party is based: that only by trading principle for ideological surrender can the Party win.  History and trends seems to indicate that is only true in the addled minds of RINOs and the media.