As some of you may know, Wikileaks is a site designed to protect whistle blowers and activists with sensitive information in order to bring the information to the public. 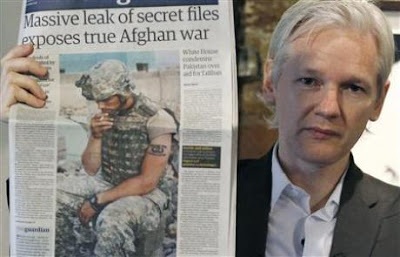 In recent weeks, Wikileaks has come under attack for publishing documents as well as not disclosing the source of information. Thousands of classified documents from the Department of Defense were recently posted for the public to see.

I considered making the alleged, brave, Pfc Bradley Manning the Rebel of the Week…however, that assumes he provided the information and this has yet to be confirmed. Bradley is however being treated like a “criminal” and has not yet had the chance to defend his case. Wikileaks Editor-in-Chief, Julian Assange, has offered to build up his defense fund, but Manning is currently being held under arrest in Kuwait. (He was placed under arrest in May 2010)

Wikileaks has also taken heat for being self-professed journalists. Bob Steele, an Ethics Director at DePauw University stated, “If Wikileaks wants to be considered journalists they should be more open about their methods.”

Clearly Dr. Steele hasn’t seen how the very organization that inspired Wikileaks can react to such transparency. If Wikileaks were to provide the identity of their sources it would not only defeat the purpose of their mission, but also endanger many innocent lives and hand them to the U.S. Government.

Another who has warned against the negative impact of Wikileaks is Security Advisor Jim Jones who stated, “[Wikileaks] could put lives at risk…”

The mainstream media seems to be focusing very light handedly on one particular effect of the released documents: Whether the White House will loose support on an already shaky subject matter, the war in Afghanistan. The House recently, as a part of a larger measure, passed a bill to supply the war with an additional $30 billion. There is still argument over specifics on the bill, but it is being pushed into signing. President Obama believes the documents are harmless to this particular part of the Government’s legislative agenda, “those [leaked] documents don’t reveal any issues that haven’t already informed our public debate on Afghanistan.”

He later stated at the same event that he encouraged Congress to provide the $30 billion for overseas efforts. Please refer to a previous post to find out where this money comes from.
Julian Assange of Wikileaks has provided more confidential information than any other attempt in history. With the rise in online communication and social networks his message, or rather the military’s message, has spread further and faster.

As one reader put, “The most important result found through Wikileaks is the knowledge that our press isn’t, in fact, reporting.”

If this is true, where now will we find our information on current events?h/t http://antiwar.com and also to Bradley Manning, an honorary rebel who needs your support.