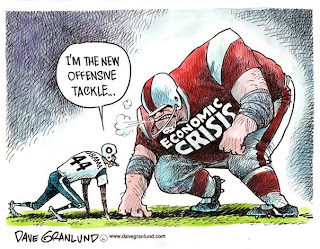 The economy. Ron Paul knew it was in trouble years ago, and now everyone else knows it. We are in what the government-sponsered economists call a “long recession” but what us buzzkills (or realists) call a depression.

Driving to school yesterday we were listening to an NPR talk show where the guests were talking about our economic situation. They were saying how important it is for us to keep giving out welfare so that “the unemployed will be out there spending.” They were also talking about how we need jobs.

These two seem mutually exlusive. I asked my 8 year old brother, if given the choice would he prefer not to work and recieve government money or work and be taxed. He said he would prefer not to have a job because he could stay at home and watch TV. If my little brother can see it why can’t the guys who went to Harvard for economics?

Instead they choose to keep pumping fake money into the economy to fix the broken dollar. Two wrongs don’t make a right and two negatives do not make a positive (unless you multiply them, but that’s beside the point). The problem was created by a staggering debt and years of fiscal irresponsibilty. Our dollar collapsed and they thought they could fix it with more of their fiat money. Our economy is (or soon will be) the worlds biggest and least funny joke.

So take some advice from the children: Stop paying people who don’t work, don’t socialize healthcare, don’t make me pay for your father’s retirement, and get back to the gold standard. Unfortunately, since we didn’t listen to Ron Paul, this situation has to get worse before it gets better. So bring it on!