How to Win Friends and Influence People is a book which was originally published in 1936. Even after eight decades, the lessons taught by Dale Carnegie are still as invaluable and relevant today as they were during the Great Depression. As the pioneer of personal skills development, Carnegie’s advice has stood the test of time as the go-to reference for human relations. You would be hard-pressed to find a business convention that doesn’t mention Mr. Carnegie’s principles and the word “success” in the same sentence. 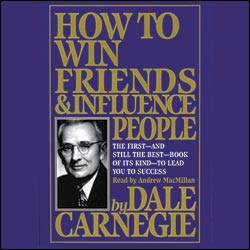 But this book is not just for business owners and entrepreneurs, anyone looking to improve their human relation skills will leave this reading with a greater sense of confidence. Not many other books evoke so many “aha!” moments from start to finish.  Along with being packed with useful information, Carnegie’s conversational writing style welcomes a wide audience, and with over 15 million copies sold in almost every known written language, you might be one of the few people who haven’t used Carnegie’s advice to improve your work, relationship, and personal lives.  Don’t be left behind.

Human relation skills are especially important for libertarian and conservative students who often find themselves having a difficult time communicating about the important issues, from health care to fiscal and foreign policy. If you have experience in activism, you understand this dilemma. This is why the libertarian and conservative movement must reevaluate the way they communicate and look for ways to more effectively influence people to their way of thinking, e.g., liberty and freedom. America’s future depends on it.  If we are serious about changing minds and winning hearts, we need to look at Carnegie’s principles of human relations as a cornerstone of our communication techniques.

Below are the tips Dale Carnegie gives in part three of his influential book. Learn and practice them. They will serve you and our movement well.

1. The only way to get the best of an argument is to avoid it.

Dale Carnegie asserts, “You can’t win an argument. You can’t because if you lose it, you lose it; and if you win it, you lose it.” In an argument people want to be right, even if they know otherwise, so while you are calling someone wrong, their resentment grows towards you and your ideas. With resentment comes hardheadedness and soon common sense disappears. All that remains is an “I’m right, you’re wrong” mentality. This is called the backfire effect, and it only cements people in their contradictory views.

This is why at all cost we must avoid the mistake of arguing with people who we are trying to positively influence, including calling people wrong, talking down to people, and being unsympathetic.  Unfortunately, avoiding heated arguments can be a difficult task that requires careful concentration because our emotions can sometimes be very hard to control. Nonetheless, by arguing we are costing ourselves victories that we desperately need. If we want to gain the good will of people who we are trying to persuade, we must welcome disagreements and control out temper. Listen first, look for areas of agreement, and be honest. Lastly, remember to promise to think over your opponents ideas and study them carefully.

Let’s look at an example.

You are talking to someone who favors government social welfare, yet you are aware that this policy leads to laziness and the incentive to remain unemployed. This might seem like a simple and easy to understand approach, but it isn’t that simple. If you jump into why government welfare is wrong and why you are right, you have already lost.

You have two options: you could go down the road of arguing, which will be very unproductive, or, you could examine his or her side and sympathize with his or her point of view. Remember, we are not going to change someone’s perspective in one session. We CAN, however, expand minds by opening dialogue in a friendly, conversational way. Throw short passes, inch down the field, and reach your goal by playing smart. In other words, plant the seed first, water it, and watch it grow.

This is called the Ransberger Pivot debate technique. Created by Ray Ransberger and Marshall Fritz, this technique allows the speaker to find common ground with the person they are trying to convince, therefore increasing his or her chances of influencing that person.

Once a person objects to your idea, you can employ this technique in three stages.

Let’s employ these techniques to our welfare debate.  Most likely the first thing the person you are speaking to will ask: “You want to get rid of government welfare? Don’t you care about the poor and elderly?”

Ransberger states that we should use active listening skills and ask ourselves what they REALLY are concerned about.

Congratulations, you’ve just used the Ransberger Pivot to change the direction of the debate from being an unproductive argument to a friendly conversation, one where you and your opponent can share common ground. Now you can discuss the best ways to achieve the end you both agree is important.

You can now give the questionnaire facts about why private charities are more effective than government welfare programs in an open, casual conversation style. Remember, listen, sympathize, and validate their concerns.  After you validate their feelings and concerns, resume the conversation towards why private charities are more effective and more moral than coercion through the government. Remember, the person is questioning your motives because they either believe you don’t share the same values, don’t agree with their concerns, or had bad intentions. The Ransberger Pivot can ease tensions and makes your opponent more open minded to your ideas. Read more about the Ransberger Pivot at Advocates for Self Government!

3. If you are wrong, admit it quickly and emphatically.

If your opponent makes a statement that is obviously wrong, it is far better to first admit that you could be wrong before correcting them. For example, if someone makes an incorrect statement, it is far better to begin by saying, “Well, I may be wrong, and I often am, but. . . ” Do you see how this sounds much more appealing? Your opponent will have a difficult time objecting if you first state respectfully that you may be wrong.  Your opponent has just been disarmed!

4. Begin in a friendly way.

If someone aroused your temper by telling you free markets are evil, you could have a fine time unloading on them. What about the other person, will they feel the same way? Will they be more likely to agree with you after being verbally assaulted? If you approach someone with your guns loaded, don’t you think they will have theirs loaded as well? When talking to people, it is imperative that libertarians and conservatives use a drop of honey to begin a conversation with an opponent. Disarm them before they even know they are discussing politics with you.

5. Get the other person saying “yes, yes” immediately.

Don’t stop there! Get the other person saying “Yes, yes” at the outset and keep them from saying “No.” If they say “No”, they have committed themselves to that answer because their pride is on the line! If we want to be effective speakers for liberty, we must get the other person to say “Yes.” This puts the person in a more accepting, forward-moving, and open attitude; therefore, we are more likely to influence our opponents.

Remember, if we want to win people over to liberty, let us look first towards ourselves. Conversations are dynamic and should be a two-way street. Stay in touch with the people you talk to. Plant the seed, remember to water, and watch the tree of liberty grow!