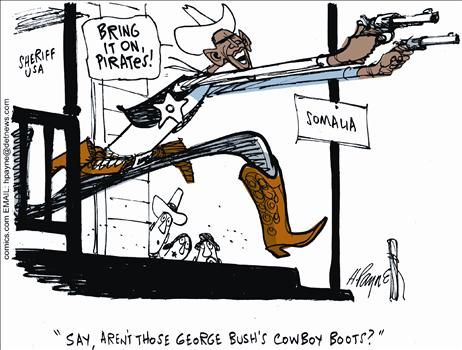 The similarity between the ideas motivating Mr. Obama’s foreign policy of “change” and that of his predecessor has become apparent even to GQ, which apparently does more than inform men of how many buttons should be on their suits and what George Clooney has for breakfast:

…[D]espite the rhetoric about changing course, so much of what we’re doing now feels inevitable, a natural progression of the decisions that have determined our foreign policy for the past eight years…Rather than reexamining the original assumptions, though, the U.S. military got swept up in developing a counterinsurgency strategy (which eventually we conducted with moderate success in Iraq). And thus counterterrorism and counterinsurgency became hopelessly confused. As one military-intelligence official put it to me: “It’s not about bin Laden anymore. It’s about fixing the mess.”

This winter I spoke with Michael Scheuer, a twenty-two-year veteran of the CIA who ran the agency’s bin Laden–hunting unit in the late ’90s and is the author of Marching Toward Hell: America and Islam After Iraq. “In Afghanistan, I don’t think we have a clue of what we’re after,” Scheuer said. When I asked him what he would do if he were in charge of American policy, he explained that he’d inflict as much damage as possible on Al Qaeda now—through targeted air strikes and assassinations and Special Forces operations—and “get out in six months.” To actually “win” the war in any traditional sense—to crush Al Qaeda and the Taliban—Scheuer says we’d need “a force of 300,000 to 400,000, one that would go into Pakistan.” Since we’re not going to do that, he says, “why bother? We stayed way too long at the fair. We can’t redeem it.”

But redeeming it by now fighting the “good war,” as it’s being called, is exactly what we’re trying to do.