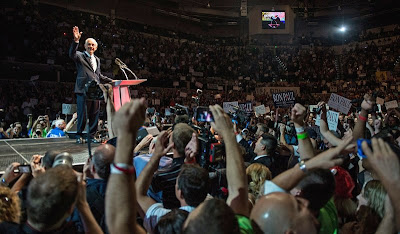 The Sunday before the 2012 RNC, a unique political event took place. Ron Paul’s “We Are The Future Rally” drew an overflow crowd of more than 10,000 young people. While the GOP Establishment was busy pushing Ron Paul’s delegates to the margins with rule changes, the r3volution was making other plans.

“We Are The Future” isn’t just a name; it is a declaration. What we are looking at is a “libertarian long-march,” to borrow a Marxist term (it’s pay back for stealing the word liberal). What this means is that liberty activists will keep pushing every way they can until a free society is achieved.  Some will run for office; others will focus on education and private enterprise; but they will all do their part to fulfill the dream of living free.

Ron Paul in his address at the rally spoke of the changing of eras. This is a powerful idea that gives a broader perspective to the libertarian mission. The Progressive era of big-government corporatism is coming to an end. It is ending not just in policy, but in the hearts and minds of people everywhere. Ron Paul announced that we have already entered an age of liberty and we are just seeing the last vestiges of the old guard scrambling to prevent the inevitable.

With that in mind, take a look at this exert from a recent American Conservative article,

What the reactions to Akin’s gaffe … expose[s] is a fear in the soul of the GOP that history is passing it by and the end may be near. For decades, the GOP has been the party that cuts marginal tax rates, opposes abortion, defends traditional marriage, sends troops to fight for our values abroad and slashes government spending.

Today’s GOP establishment is queasy even talking about social issues and recognizes that the new America has had it with the Afghanistans and Iraqs, wants to raise taxes on the wealthiest 1 percent and contains scores of millions who will punish any politician who threatens their benefits.

The GOP’s insoluble problem is that the multicultural, multiethnic and multilingual country they created with their open borders appears not to like the brand of dog food the party sells.

I have a message for the Grand Old Party: History IS passing you by! Whatever relevance the GOP Establishment still had was destroyed in Tampa at the 2012 RNC.

How can anyone be so sure of this? Why, when straits seem so dire?

Because the old regime is in the process of imploding on itself — more and more people are learning to love liberty every day. Ron Paul more than doubled his votes from 2008 to 2012 in just 4 years. Most people do not vote in primaries unless they are motivated and paying attention, so most of Ron Paul’s votes were not mere punched chads to be forgotten by history — they are newly awakened and invigorated political activists who are in this for the long haul. The number of votes hasn’t just doubled; the number of people that hold libertarian values and are willing to act on them has doubled.

But it isn’t just Ron Paul people though. The trend across America is that folks are loosening up on social issues and losing faith in the government’s competence to solve economic problems — in other words, Americans are increasingly socially liberal and economically conservative, or, broadly speaking, libertarian. Why then would the GOP push away the one man that can bring this in this new generation? Let’s ask the former chair of the Republican National Committee, Micheal Steele. He said on the Daily Show:

What the Republican National Committee did to Ron Paul was the height of rudeness and stupidity for this reason: Why would you alienate an individual who has the ability to attract a new generation of voters, who are already skeptical of your institution but are willing to at least listen through the vehicle of this individual and the words that he is saying?

Why would you alienate them, get on the floor and not let them speak? Not have his name go up on the board and see the number of electoral votes that he receives? This is crazy! … They are afraid of that which they cannot control.

Let’s read that one more time: They are afraid of that which they cannot control.

What we saw at the RNC is nothing more than Party dinosaurs refusing to let go of power. They are staring history dead in the eyes and will not blink until their eye sockets are dried out.

There will come a day when the generation that grew up with Leave it to Beaver will be too few to support candidates cookie-cuttered from the 1950s. As time goes on there will be less “Moral Majority” type voters, and more “live-and-let-live” type voters. It is in the GOP’s best interest to embrace, not alienate, the liberty movement. As Ron Paul said:

Instead of seeing this as a continuation of the era of the 20th century that gave us so much death and destruction and undermining our liberties, and conditions today that are so dangerous, let us think that we are now moving into a new era.

A new era where we’re going to concentrate on liberty and freedom and property and peace. I believe that is the cause that we should lead and I thank you very much for being a part of it.